Strengthen Communities by Building Relationships Between the NYPD and Community Members,

Including Youth Across the Five Boroughs

The Foundation has a long history of bringing the police and communities together. Through increased dialogue and positive interactions – including creating meaningful opportunities for youth – we lay the groundwork to resolve neighborhood concerns and enhance safety for all. The public’s partnership with the NYPD is essential to the safety and strength of all our neighborhoods.

The NYPD directs every resource toward a singular mission: making the safest large city in America even safer. How we get there is the next level of Neighborhood Policing.
-Police Commissioner Dermot Shea

The Police Foundation helped create the Community Partner Program through which 650 community leaders citywide serve as liaisons between local cops and neighborhood residents. Participating officers gained a deeper understanding of the neighborhood culture and more effectively engaged with the community.

The Foundation funded the creation of the 127 Penn NYPD Community Center in East New York, where the Foundation is assisting the Department to expand the recreational, social, and educational services provided to the community, making the Center a key building block of police-community relations. 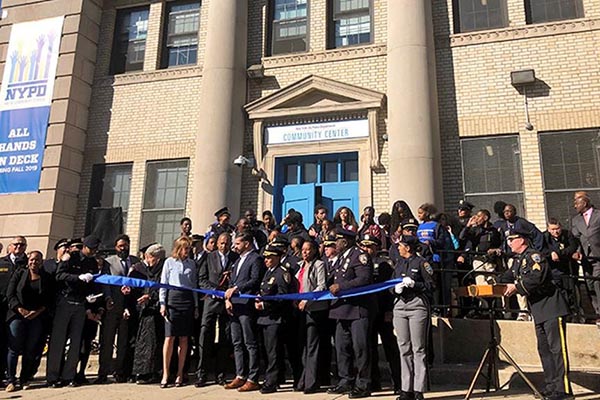 When you see a community that is working strongly and closely with the Police, you usually see less crime, you usually see better relationships. The New York City Police Foundation is extremely important to the work that I do.
- Chief Jeffrey Maddrey, Community Affairs Bureau

Since 2017, the Police Foundation has funded the citywide Build the Block program to raise awareness about Neighborhood Policing. Neighborhood Coordination Officers have held more than 3,300 meetings since January 2018 with 73,438 residents to understand community concerns, identify problems, and develop strategies to address crime and quality-of-life issues.

In 2020, the Foundation worked with the Community Affairs Bureau to host a series of Stop the Violence Town Hall/Family Day events throughout the city where officers re-installed basketball hoops that were removed during the height of the pandemic and engaged in sports and conversation with young people.

The Foundation supports the work of the new Community Affairs Bureau Rapid Response Team, which was established to help people affected by violence. A recent example of the work they do was covered by NBC News as they followed the team as they brought groceries to a robbery victim in Queens.

Nobody ever asked me before how I feel about my neighborhood. It makes you want to be a part of making it better.
- John Negron, Student

From mentorship and career development to scholarships and sports leagues, supporting NYPD engagement with youth is a transformative piece of the Police Foundation’s strategy to build bridges between the police and communities by building trust and creating meaningful opportunities.

The Options Program developed as an outgrowth of the Foundation’s work with officers and youth as part of Neighborhood Policing. Options use virtual reality scenario simulation to teach young people how to resolve conflicts and navigate potentially challenging or intimidating situations, including gang recruitment, sex trafficking, cyberbullying, police stops, guns, and hate crimes. The program also offers internships and job opportunities for select graduates. 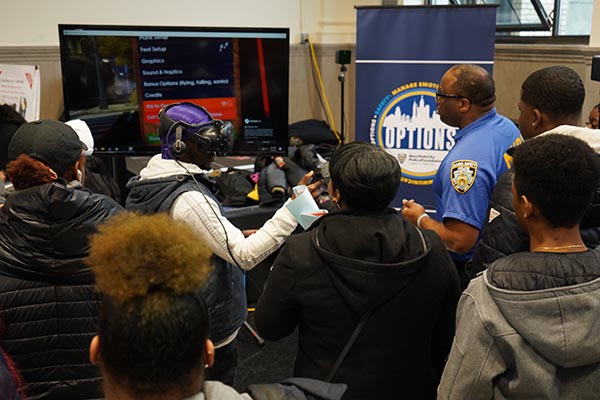 The Foundation funds the NYPD Law Enforcement Explorers Program, which gives young men and women across the city, ages 14 to 20, an introduction to law enforcement and criminal justice careers, resulting in stronger ties between the community and police. Explorers are taught the importance of higher education, self-discipline, and respect for diversity and human dignity through training, community service projects, and other events.

Each year, the Foundation grants approximately $20,000 in scholarships to support youth education. The Lesandro Guzman-Feliz Memorial College Fund is given in honor of a 15-year-old Bronx resident and Law Enforcement Explorer who wanted to become a police officer but was killed by a gang member in 2018 in a case of mistaken identity.

Each year the NYPD also kicks off the school year with a Back to School Backpack Giveaway sponsored by the Foundation.

The Foundation, in conjunction with community partners, launched an initiative called #mynycstory, which provided NYC residents with a platform to tell their own story through video, photos, essays, and other media – in some cases, even the opportunity to win a $5,000 cash prize for the best-told story.